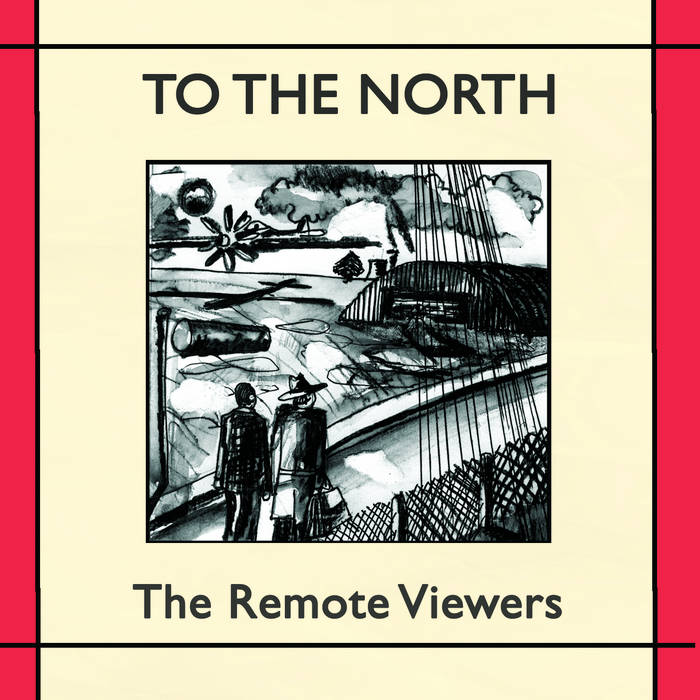 The Remote Viewers – To the North.
What a difference a well deployed field recording can make.
The Remote Viewers’ ninth album, To the North begins with what sounds like footsteps on gravel, an approach made on private land, a trespassing, intrusion or return home. It’s sufficient to throw the ensuing material off-kilter; what could be otherwise described as a comfortable and comforting tour through a variety of approaches to jazz derivatives becomes something slightly askew, exuding a slinky menace that insinuates itself further with each repeated listen.

Saxophonists David Petts (the Poison Cabinet, B-Shops for the Poor) and Adrian Northover’s (Dha, Happy End Big Band, B-Shops for the Poor and Sonicphonics) ensemble has seen multiple line-up changes over the years. For this release – their second without singer Louise Petts – they augment their sax quartet (rounded out by Sue Lynch and frequent Annie Lewandowski collaborator Caroline Kraabel) with the incomparable rhythm section of John Edwards on bass and Mark Sanders on drums. Much of the fun to be had on To the North comes from listening to these two playing it straight and sticking to grooves; even when locked down and metronomic Sanders remains colourful and supple, while Edwards’ playing hints at the near sacrilegious prospect that this most ubiquitous of free improvising bassists might get a kick out of playing Richard McGuire’s bassline to Liquid Liquid’s Cavern (famously sampled on Grandmaster Melle Mel’s classic “White Lines”).

All of which runs the risk of sounding like damnation with faint praise. Indeed, on the surface there’s little to recommend the latest Remote Viewers album. There’s no hook, no gimmick. The music playfully dips between composition and improvisation, always impeccably judged, conducted with a restrained poise and a keen awareness of the fine line between welcomingly familiar and coffee table anodyne. The recording is full, warm and rounded. It’s everything that should be detestable, with its spy movie vamping, sanded and polished surfaces and shameless, unrepentant tastefulness. Christ, it’s nearly an acid jazz record.

Yet somehow To the North transcends these unpromising ingredients unscathed. It might be to do with the stellar pedigree of its players; its lean economy of arrangement; its muscular swagger; the slight suggestion that Petts and Northover are sneering at those who take this music business just that little bit too seriously. It’s fun, infectious and catchy, with a sense of craft that makes it a pleasure to listen to. Just this once, that seems more than enough. I won’t make a habit of it.