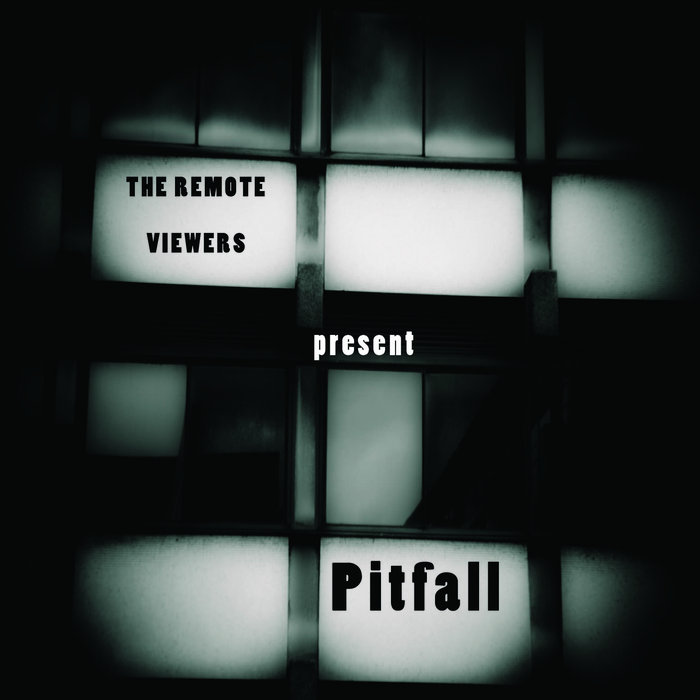 Living up to a promise many CDs make, The Remote Viewers septet have created a 12 track CD that legitimately could be the soundtrack of a movie. However more than being a mere collection of cues, underscoring and scene-setters for a classic Film Noir, David Petts, the band’s tenor saxophonist and chief composer has written music that can stand on its own without visuals.
Although there are points are which the sonic imagery is so strong that imagining a potential dramatic situation is almost overpowering, Pitfall’s chief pleasure is discovering how the sophisticated arrangements and instrumental balance plays out. One of the reasons this session is notable is the return of drummer Mark Sanders, who recorded with the band in 2010. Because of this the rhythm section of bassist John Edwards and Rosa Lynch-Northover on piano and tuned percussion is properly balanced with the variety of reeds played by Petts, Adrian Northover, Caroline Kraabel and Sue Lynch plus Petts. In other words, while a track such as “Hiring Hall” may only concern itself with scene setting piano chording and chomping reed tones, “D.O.A.”, composed by Northover, features a contrapuntal contrast between one saxophonist’s circular breathing and equally continuous firecracker-like sizzles and crackles from a mechanized noise generator. At the same time the Viewers distinguish themselves from other horn-heavy ensembles like the World Saxophone Quartet by tempering and cleaving massed reed harmonies with contrasting textures. “Notetaker” for example interrupt the weight propelled by four harmonized saxophones with bass string swells, autoharp plinks, plus loosened lugs and rim shots and bell-like pings from Sanders. Moving onto the fanciful realm of wide-screen shots and Panavision, the band replicates these observable advances with auditory ones such as the use of overlapping, polyphonic reed tones wedded to rhythmic impetus. Edwards’ wood-shaking thumps are prominent throughout, with other bull fiddle strategies used on tunes such as “Left Bank” and the title tune. Symbolically disclosing sub-plots as well as the main narrative, “Left Bank” is a series of cinematic two-shots: buzzing wasp-oscillations and drum pitter-patter for instance for one; plus the meeting of thin clarinet puffs and thick baritone sax blows. Both these face-offs are overlaid onto the pressurized rhythms of Lynch-Northover’s unique tuned percussion. Heading towards the filmic denouement with electrified power on “Pitfall”, shrill altissimo whistles plus pounding piano lines maintain the proper cinematic tension. Finally unlike most CD’s final tracks which are just another tune, “Murder Stones” blends harmonized saxes, heavy bowing from Edwards and wispy string-like whispers into appropriate behind-the-credit’s-crawl accompaniment. The only pitfall that may result from careful listening to Pitfall is the frustration you may experience trying to decide which atmospheric – and preferably soundless – black and white film it could best accompany.