Notes Lost in a Field

by The Remote Viewers Trio 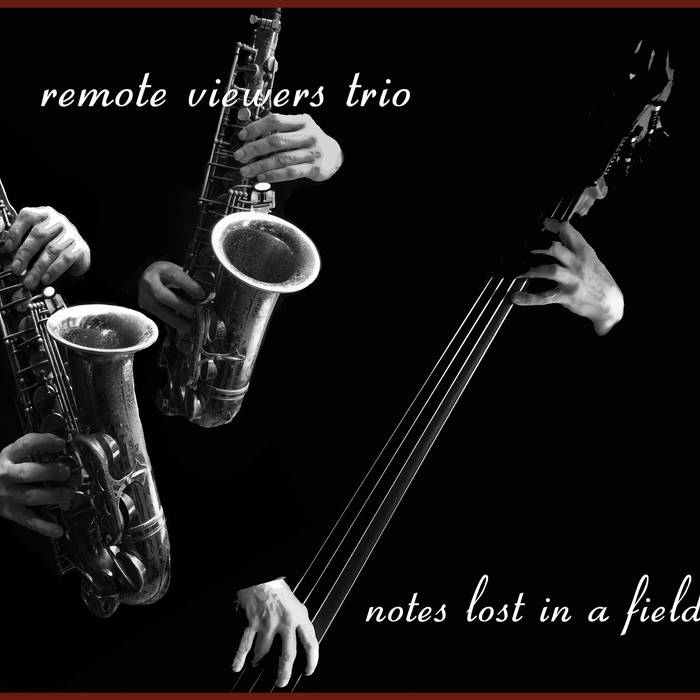 After release one of last years Avant jazz highlights the excellent CD album The Last Man in Europe, London project The Remote Viewers(here as a trio) return once again with their distinctive blend of angular and often noir atmosphere focused jazz. Notes Lost in A field is fifteen track CD album which finds the project at it’s most fiery, noisy, angular and awkward. And once again it's another extremely worthy venture from the project, who really need way more exposure than they get.As with most of this projects fairly prolific discography, this new CD album is self-released. The CD’s presented in a simple-yet-effective mini gatefold sleeve, and on its front, we get a picture of the three player’s instruments in shadow.
For this release, the players are band leader/ key songwriter David Petts on Tenor Sax, Adrian Northover on Alto Sax, and John Edwards on acoustic bass. So the sound is intimate, but also very searing and snarling. For the most part, the tracks are focusing on the projects more jarring and sinisterly off-kilter sound- all making for an effective release that remains nicely tight, taut and angular through-out…with later on in proceedings a more darkly moody edge coming into play.
Things kick off in great sneering & snarling fashion with “You won't Hear The Bullets”- this just under four-minute track finds a claustrophobic mesh of baying and granting horn work stretched out into a gloomy-yet- seared fug of sound. Track number three “The Aspirin Kid” is a galloping- through- lopsided mix of tight bass pads and darts, which are blended with jarring yet urgent sax that just hints at a brooding noir melody. “Enemy Traffic” is all squealing & slicing horn work, against an almost brutal blend of slap bass & wondering saw. It’s only by the final track, the just over two-minute title track- that the trio slip into a more considered and decidedly moody pace- which finds Edwards bass padding out a bobbing lead line, to which the twin horns smokily waver and slide out the tracks darkly seductive melody line.
With Notes Lost In A Field Petts and his cohorts have once again shown that they one of the most urgent, often jagged, and distinctive players in the Avant jazz scene at present. So please if you do enjoy the more seared, angular, and jarring side of Jazz you really need to do your self a favor and check this album out- to buy direct and find more about this project head here.

Rating: 5 out of 5
Roger Batty
www.musiquemachine.com/reviews